I was a mama’s boy. For literally my entire life, my mom and I were super-close, and it started partially from necessity. When I was two years old, my dad left Taiwan to pursue a new opportunity for us in the United States. The only snafu was that it took more than three years before my mom and I were able to join him. So, for three years of my early life, it was just my mom and me.

We were like … well, I guess you wouldn’t say that we were peas in a pod. It was more that I was a pea in her pod. I was her only pea in her only pod (at least until my sister came along seven-and-a-half years later).

Still, we always remained close, and I never ended up living more than an hour’s drive away from her. Is it any surprise that I feel this emptiness now that the one longest standing fixture in my entire life — the one presence I was consistently and lastingly closest to — is gone?

But then, Melissa made a very good point …

My mom wouldn’t have cared about any of this. She was always an introvert. She never needed a large group of friends. She never wanted to be in the spotlight. All she wanted was to know that I (and … mmm, yeah, sure … my sister … I guesssss) was doing okay. We were the ones who mattered to her.

So yeah, I realize now that I’m doing this for myself, My mom was nobody to everybody else, but she wouldn’t have cared.

This thank you is from me then. Thank you for reading my posts about her. Thank you for clicking on the photos I’ve shared. Especially if you never met my mom, it means the world to me that you’re willing to get to know her through me.

She wouldn’t have cared, but … well, I care. 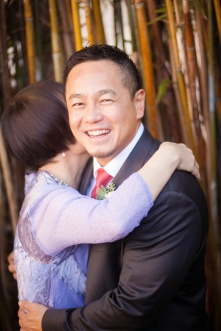