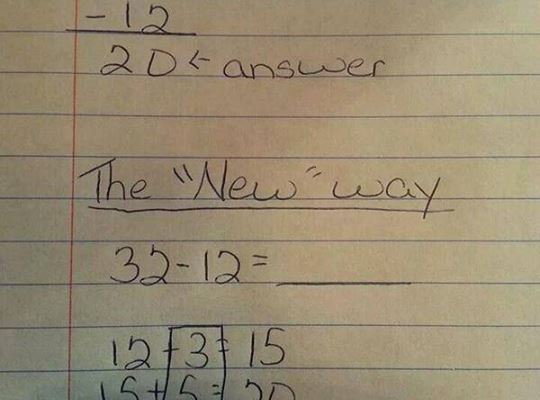 I must be a teacher at heart. I’ve been out of the profession for almost two years now, and I still can’t help sticking my nose in teaching discussions… or gripes, as it were.

By now, you’ve probably heard of Common Core, the new education standards that people all over the country are hating on. Here’s a pic that’s been making the rounds of social media, as an example of how baffling common core math is:

“Look at how simple the old way of doing subtraction is,” the caption invariably reads. “And compare that to the ridiculous new way. Does anyone even understand what’s going on?”

Well, yes, actually. I totally understand, and here’s a secret:

This new way is exactly how you handle subtraction in your head, on an intuitive level. You just don’t realize it.

The reason the new way looks silly is that they’re using a simple subtraction problem. It’s easy to solve in your head, so you don’t need to use the actual process they’re trying to teach. But hey, that’s a good way to teach. You use simple examples to illustrate the underlying process, and then once the student understands it, you have the student apply the process to more difficult problems.

Imagine you’re learning to juggle. You’d probably start by throwing and catching a single tennis ball twenty thousand times. Yeah, you’d feel pretty dumb doing that, but isn’t that what you need to do to someday be able to keep six flaming chainsaws in the air at the same time?

That’s what this example problem is. It’s starting you with a single ball, instead of throwing a bunch of chainsaws at you. You should be glad for that.

So let’s skip ahead to an actual problem where you would need to use this new subtraction process. Let’s say I ask you to subtract 1,789 from 3,024, and I make you do the problem in your head. You can’t write anything down. What would you do?

Well, many of you would probably start by doing this: 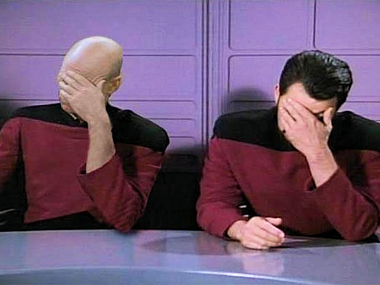 But assuming you get past that, what would you do next?

In your head, you’d probably go through a process similar to this:

Does that make more sense now? The problem is too complicated to perform in your head, so you break it down into a bunch of simpler subtraction problems, and then you add up all the individual pieces. If a maniacal mugger cornered you in a dark alley and pointed a gun at your head and demanded that you hand over the difference between $3,024 and $1,789, this is the exact process you’d have to follow. You know, assuming you’t not Rain Man.

Here’s what it comes down to: Subtraction is ridiculously difficult to perform in your head. Addition is way easier. So if we can convert a subtraction problem into an addition problem, then we turn an impossible process into one that’s entirely doable. We’re taking an ingrained algorithm — the “old fashion way” [sic] — that we’ve been doing wrong for, what, centuries (?), and we’re illustrating the way our brains will naturally process it instead.

I think that counts for something. And that’s why I’m not ready to give up on Common Core yet.

Addendum, 3/31/15: To clarify, I’m not saying that my example is the only way to solve the problem. I’m saying that we’re breaking down a complex problem into simpler steps. Yes, there are many ways to break it down, and ultimately, what matters is that we understand the entire process, not just memorize an algorithm. That’s what Common Core teaches.